Sydney and the Blue Mountains

Finally in Australia—my first time ever to touch the continent, though Mark’s already been here a couple of times.  It’s pretty much how I imagined. Sydney is often photographed and I recognize the sites—the Opera House is beautiful and the harbor is lovely. We stay with Mark’s cousin David (Mark’s aunt married an Aussie and has raised her family here) and his wife and kids. They have a lovely house near Bondi Beach, and we enjoy the sunny warm weather for the first two days. 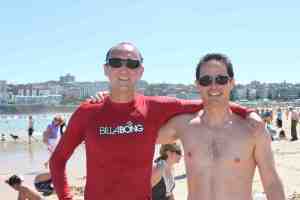 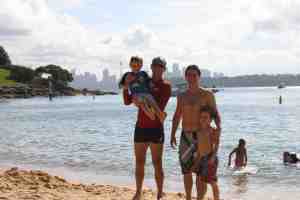 Then we head to the Blue Mountains, to Mark’s aunt and uncle’s “farm.” It’s a great rural escape, with horses, sheep, and tons of wild kangaroo. The kangaroo are the highlight, and we see them hopping around all over the place.  At first they seem surreal—so much like a national geographic film that it seems like a joke.  But they are real, and we love watching them hop around the farm.

Aunt Adrienne manages to arrange a horseback ride for us, we do a little bush walking, and we also visit the Three Sisters, a spectacular vista of the Blue Mountains.  It’s great to spend time with Mark’s other cousin Jonathan and his family, and we learn a lot about Australian history from Mark’s uncle Ralph. 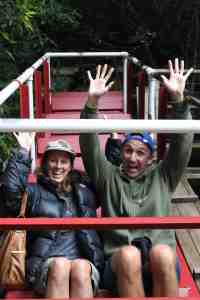 I also have a new fan, Jonathan’s daughter, Jade. 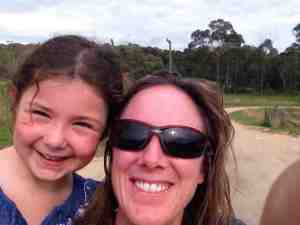 She was very sweet and worshipped me, which I didn’t mind at all.  This is what I heard constantly all day:

Now, I have to tell one little story about the farm that I’ll never forget.  The first night Mark and I shared a cabin with Adrienne and Ralph, and after we all went to bed, I got up in the middle of the night to go to the bathroom. I was a bit perturbed to find a couple of bats swimming in the toilet.  Not sure how they got there, or what they were doing exactly (drinking water?), but rather than wake up everyone and make a scene, I quietly got back into bed, shuddering.  A few minutes later I heard Adrienne wake up and head to the bathroom. She took care of her business but as she was turning to flush, she finally saw the bats.  She woke us all up and the boys helped get those bats out of the toilet–quite a sight!

We head back to Sydney and get back in time for a Cricket Match, which is a lot of fun. The game is fast-paced and we start to follow it by the end. Pretty neat experience! 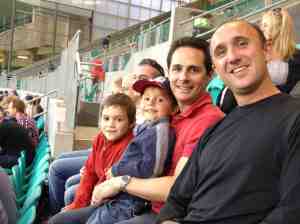 We do a few other Sydney sites (Art Museum, Opera House, Botanical Gardens, etc.) and celebrate New Year’s Eve, which is a major event in Sydney because of the huge firework display off the Harbor Bridge.  The firework show lives up to its expectations—quite a spectacle! 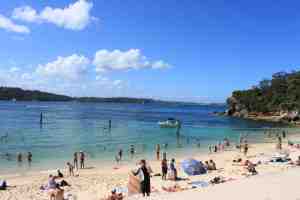 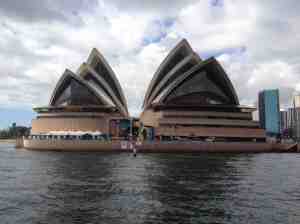 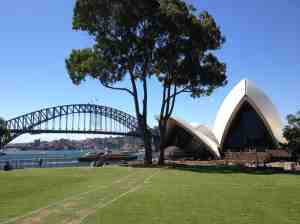 Posted by hurdlefast on January 9, 2012 in Uncategorized