Open up any guidebook about Puerto Rico and you’ll read something cliché about how “here you will experience the true island pace of life of warm trade winds, island music and delicious rum.”   I read that crap all the time everywhere I go, and when I walk the local streets on my own I always realize it was slightly bullshit.  I discover the writer took liberties with the truth in order to paint the atmosphere a bit more rosy.  But this was not the case as we stepped ashore at Esperanza, the southern town of Vieques island, one of Puerto Rico’s Virgin Islands.   On the dock we were greeted by small children laughing and jumping of the dock, chasing needle nose fish.  Along the water was a lovely, short malecon (beach boardwalk), lined with gazebos every now and then for shade, a couple of vendors selling coconuts and jewelry, and lots of handsome couples strolling by.  The women could have all been movie stars, starring in their own Puerto Rican set film.  Wearing silk halter tops and tight pants or skirts, they hung on their beaus’ arms provocatively.  Old men squatted in groups of two or three on the malecon, some playing a sort of roulette game, others just smoking and talking excitedly to each other.  If music started to play, old couples spontaneously started dancing in the streets. 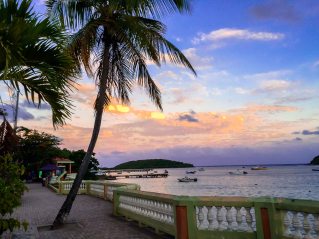 Oh, and did I mention the free range horses wandering through town, even strolling along by themselves right on the malecon? It’s such a delightful sight! 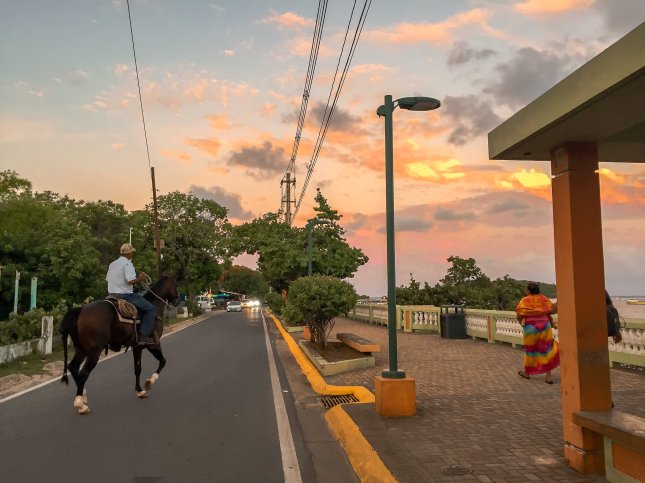 This one has a rider, but in the morning seven horses were grazing on their own down the malecon.

Everyone greeted us and our dogs as we walked by, in a mix of English or Spanish, and everyone was smiling and friendly.  All the bars across the street were open air and mixed with island locals as well as of mainland Puerto Ricans visiting for the weekend.   We settled at one for a drink, and the Rum Punch special was amazingly delicious (the friendly waitress said the secret was the orange bitters, but I think it was the fresh passionfruit juice as well).  Later we climbed three flights of stairs to enjoy a rooftop bar and watch the sunset. The architecture was gorgeous and there was even a small infinity pool where you could set your drink down on a floating flamingo. 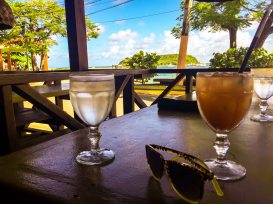 Well, not a bad spot to be stuck, right?  Yep, we are stuck here.  After nearly three weeks of literal smooth sailing, our last few days in Vieques have been full of mishaps.  It started as we left the island of Culebra after a late lunch. (Culebra and it’s little island next door, Culebrita, were gorgeous by the way. Check out Mark’s shots from the drone.) 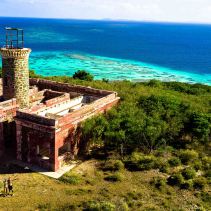 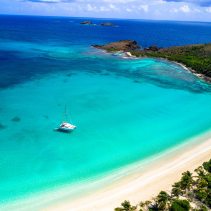 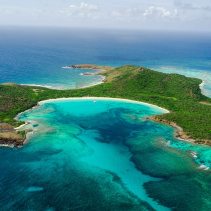 I suppose we were getting cocky leaving so late, and we got reminded about who’s the boss (Mother Nature) after getting hit by two surprise squalls during our 15 mile sail.  My fearless captain Mark got completely soaked and was pretty much blinded by the rain (while me and the doggies took a nap in the salon—at least I wasn’t nervous!) and then the second one hit just before we got to the island. We decided to wait it out rather than try to enter a narrow bay in the high winds, so Cap took another one for the team while I stayed dry. Finally the storm passed and we got a good look at the bay. Hmmm. What is that lining the entrance to the bay? Ah yes, it is a red buoy chain completely barricading the entire entrance to the bay? WTF?  We had just read about this bay in the cruising book, and it was supposed to be good shelter and an easy anchorage.  Except we couldn’t get in!  After stalling outside the bay for a half hour (and even radioing for information—no answer) we put it together from online forum posts that as of last month, the Navy had closed the bay so that they could disarm old unexploded mines dropped in the bay over the past 50 years.  Greaaaaaaaaaaaaaat.  Now what?  We looked at the map and the next possibility was a good ten miles away, around the eastern point which was known to be rough.  It was 5pm, so we could either head back to Culebra and arrive after dark to a bay that we knew, or hope to beat the sunset around the corner and find another bay. But who knew if the Navy had closed that one too?

We decided to keep going around the point, and at 6:30pm we glimpsed Bahia Salinas del Sur, which luckily was open and easy to get in. We dropped anchor and realized we couldn’t go on shore (again, there’s a sign warning about those pesky unexploded bombs on shore).  But we were happy we are in safe harbor.

Day 3 and 4 don’t treat us much better. We move to Bahia de Chivas and get skunked on a dive site we had read about.  It’s super shallow (about 8 feet) and bad visibility, and the only time it rains is during the 40 minutes we are in the water, which makes the visibility even worse. Then Mark goes for a run and pulls his calf.  It’s a chronic injury and when it happens we know he’s out from running for at least two weeks. Ugh.   That night we call for a taxi to pick us up to take us to town to catch the NBA game, but all the taxis refuse because it’s too far for them to drive.

Even Pancha is a bit out of sorts here in Vieques.  She had quite some excitement at Playa Chivas.  So me and the dogs go to shore in the dinghy for an afternoon beach romp.  It’s a shallow beach landing, which takes some finesse to come in quick enough to hit the beach, but slow enough so that I have time to lift the outboard motor at the last moment.  Everything is going well until I see two huge Rottweilers coming out of the bushes at the beach.  I immediately decide to abort the mission–I quickly make a 180 in the dinghy. But alas, Pancha spots them. We are about 50 feet out in the water, so all she can do is bark, right? Well, yes, for starters. Apparently the presence of two 150 pound rotties (on what is probably their own beach) pisses her off, so she starts barking her head off. The rotties bark back…and something clicks in her. She thinks, “Hell no.” She dives off the dinghy and starts swimming her way to the shore! This is the dog who hates to swim, by the way!

I’m totally shocked and have no idea what to do. If I go into shore I’ll have to also handle the shallow beach entry, the outboard motor, Xolo who is now barking like crazy too, and the wrath of two rotties. So I tell Pancha, Dude, you are on you own. Come back to the dinghy if you want to live.

Meanwhile she’s swimming her tail off towards shore. The rotties jump in and start swimming to her.  Xolo is cheering for Pancha enthusiastically from my lap (with no illusions of backing her up).  Finally one of the rotties meets Pancha midway between us and shore.  Just as they are about to touch noses, Pancha’s little tail goes up like a rudder and she makes a quick 180. She starts booking it back to the boat but the rottie’s still following her!  I yell, “Hurry Pancha!” and as she gets near the dinghy, I grab her collar and pull her up.  She cooly shakes off in the dinghy and mounts at the stern again to bark a few last barks at the rotties as we hightail it out of there.

Finally we sail to Esperanza, that lovely town I just described, and we have a very nice night.  Perfect—we can leave Vieques with happy memories as we sail the long trip to St. Croix—40 miles, our longest sail ever. In the morning Mark set the alarm and we set out at 6:30am (I helped him with the mooring ball and then jumped back in bed).  About a half hour later he yells down to me.  The seas are rough and the dinghy is dragging low behind us.  I head up and notice HUGE 6-8 foot waves and the winds are at 35 knots. WTF? This was not the forecast.  We are headed due east directly into the wind, and the boat is taking a beating.  Mark has to reef the sails because the winds are so strong and I start getting nervous at the height of the waves. We deliberate for the next hour about turning back, and finally decide to retreat after calculating our slow pace.  We are cruising at a snail’s pace, heading about 2 knots per hour, which will make our trip 12 hours. So by 9am we are back in Esperanza. Nothing to do but head back to bars I guess?

So we spend another day bar crawling in Vieques. 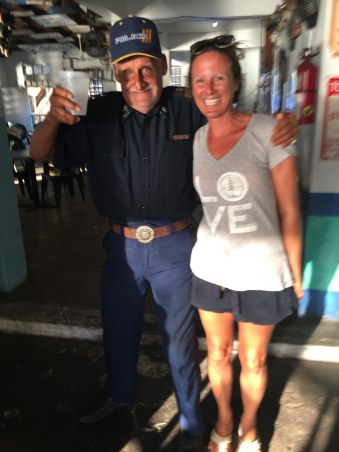 We hitch a ride to the other side of the island (with these hilarious two brothers who can’t stop showing us Instagram pics of their favorite professional wrestlers), and we end up at Mar Azul, the local drinking spots for sailors.  Perfect, because we get friendly with Captain John, a salty dog charter captain who gives us loads of advice about how to get back to USVI the next day.  After carefully considering the charts, his last words are: “Check the winds tomorrow, and if it’s bad, remember, never leave a safe anchorage if you don’t have to.”

Next morning we try again and the seas are calm til about 8am.

Then the wind picks up again and it’s just like yesterday.  We decide to make a run for it all the way back to St. Thomas (instead of lengthening our trip and sail days towards St. Croix) and it’s a long haul for Cap. 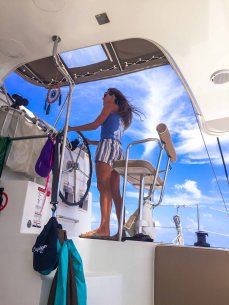 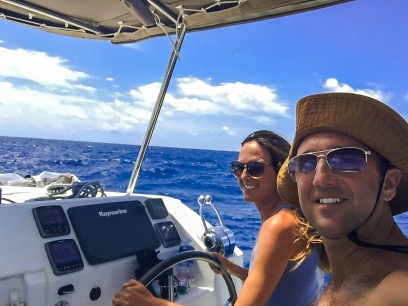 After 9 bumpy hours we make it—gloriously happy to be back at Secret Harbour, the very first bay we ever laid eyes on in USVI. Feels like home!  Now it’s time to get some jalapeno poppers at the Sunset Grill and catch Game 6. Go Cavs!

Posted by hurdlefast on June 15, 2017 in Uncategorized